If you read my last post, you know that I had a little “hiccup” with my memory vault in Historian recently.  By hiccup, I mean that I saw the error message and my stomach dropped.  There may be another word for that, but it's probably not as pretty.

It all started when I innocently opened Historian the other day to find a few photos.  The first error message I received said that my vault was damaged and could not be opened.  I wanted to believe that the message was just a fluke, so I closed the dialog box and tried opening the vault again.

I read the details in the error box this time, and it gave me the option to try recovering from a shadow copy, or I could attempt to recover the most recent good vault manifest from 10 days ago.

Now, anyone who has listened to me talk about Historian (Memory Manager) in the past has undoubtedly heard me talk about the value of the shadow copy.  I do think this single feature alone makes the software worth it.  However, you have to actually plug in the drive to get the shadow copy to run, and in my haste in recent months, I was behind on my shadow copy.  (Shame on me!)

So, I chose the option to recover the most recent vault manifest.  That still brought back 32,000+ photos with star ratings, facial recognition tags, and any other organizing I had done over the years.  But, I had imported photos from my camera, two phones, my tablet and my mom's shared pictures from Dropbox since the date of that manifest.  So I was still missing more than 100+ photos.

The first thing that I noticed when I opened the recovered vault were several damaged or missing photo files. 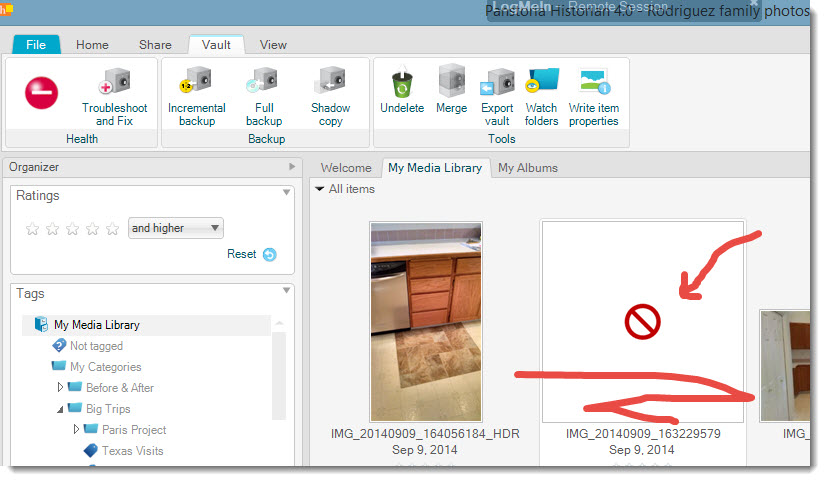 This isn't good.  I have no idea what that photo was, and this particular photo was definitely not important, but I found out it wasn't the only one.  I clicked the icon for “Troubleshoot and Fix” in the top left corner, and this is the message I received.  (It's a good idea to check your vault health from time to time.) 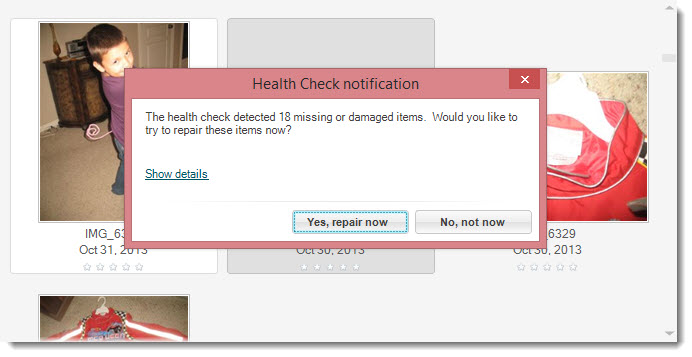 Of course, I selected Yes, repair now.  That may sound simple, but the next step is to tell it how, or from what source, you want to repair the files. 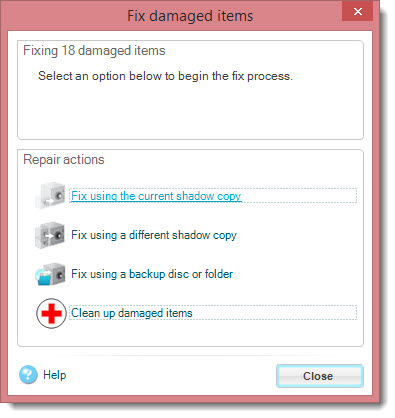 This is where a shadow copy comes in really handy.  I've said it previously, and I'm sure you'll hear me say it again, but restoring from the shadow copy is cleaner and results in fewer damaged or corrupted files.  If you have a recent, reliable shadow copy, this is the best choice.

If you create backup files and/or folders, you can restore from those, but I believe this is more complicated.  The incremental backups that Historian prompts you for only backup any newly added or edited items, so if the corrupted file isn't a recent one, you will probably have to work with more than one backup file to find it.

Let me say, I'm actually not an expert with the incremental backup systems.  I'm just too lazy for that.  If I can't do it quickly and easily, it probably won't work for me.

As it turned out, when I went through this process, I didn't have a really recent shadow copy, and I wasn't able to access a backup disc.  (Shame on me.)  I had been so wrapped up in the process of moving, I hadn't dug my external drives out for a while.

The good news is, I have one personal rule that I follow that saved my bacon this time.  As a rule of thumb, I never delete the photos off of my memory card or phone until I've run a shadow copy to backup my vault.  So I still had all of the original photos I needed on my memory card and my phone.

Even better: my mom and I share photos with each other via Dropbox.  Before I put my photos into Dropbox for her, I usually go through and rate them at the very least, so that I only bother her with the good ones.  So I started out by reimporting the photos I had shared in Dropbox, and that brought all of my ratings and other metadata back into my vault with them.  Then I filled in the gaps by reimporting photos from my memory card.  The duplicate checker in Historian made sure that I didn't bring anything in that I already had.

I ran the health check again, and thankfully, got the all clear on my vault.

So, I definitely learned my lesson.  I have all of those photos back in the vault, the vault is repaired, and the shadow copy has now been run.  No more scares like that.

I hope this has helped you, too.  Please, before you keep moving on, make sure you have a backup of some kind.  If possible, give yourself two types of backup … it's just that much safer.